Make Your Career With Our Unique Coaching Programmes

At Triple A Education Our primary purpose remains to assist you in succeeding and to provide you with a learning environment that will help you reach your academic objectives. 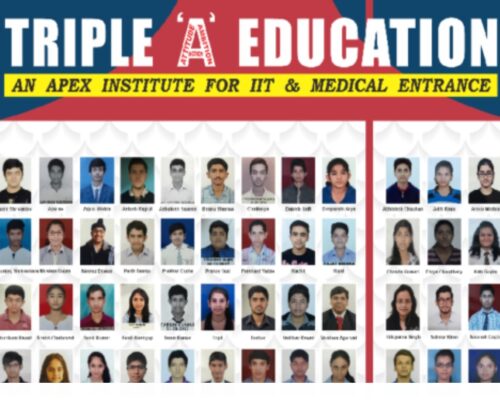 We are Innovators with a mission to create Engineers and Doctors

Since 1999, Triple ‘A’ Education, a well-known name in JEE and NEET preparation, has been leading students to success. Triple ‘A’ Education has a 20+ year track record of providing comprehensive, results-oriented JEE and NEET preparation programmes and is today one of the best IIT and NEET coaching institutes in Noida. So if you have a dream to become an Engineer or a Doctor, come to us, we’ll help you achieve your goal.

Join Our Community For: 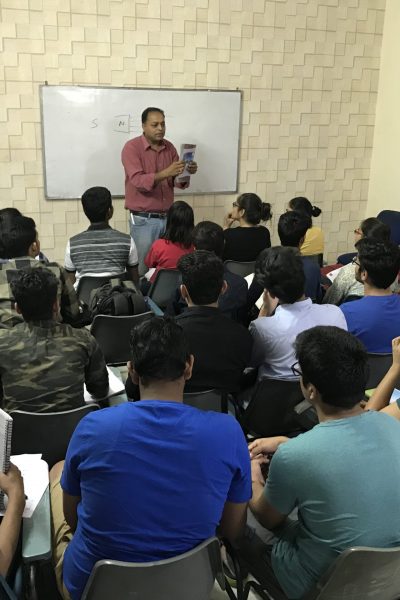 - 100% Money Back Guarantee if not short listed in JEE/NEET

- Get your seat OR Get your money !

- First Institute in India to provide this facility

- Take our scholarship test and get up to 100% tuition fee waiver.

- We firmly believe that money shouldn't be the barrier in your education. Special discounts for underprivileged aspirants

- LIVE video lectures which will be available as recorded lectures for future reference.

- Language can never be a barrier to your success.

- We keep our sessions easy to understand and happy with no language barrier.

- We have recent IITians and rank holders in our mentor panel.

- You'll be appointed a personal coach / mentor who is going to help you throughout your journey.

- Our mentors will keep you motivated and adhere to every doubt in your journey.

- We have regular motivational / therapy sessions for our students so that they don't feel low.

- Regular motivation is crucial for any competitive exam.

We at Triple A Education believe in providing quality education in a much interactive and unique manner. Triple A Education is for everyone who has an ambition to do something big in Life. With our action oriented teaching methodology, best in class academicians and well researched study material we work to develop such an attitude in our students that they start believing in themselves and get ready to conquer the academic goals which they and their parents have long dreamt of. In short and as said earlier, we are one of the best IIT and NEET coaching institutes in Noida and we aim to turn your dreams into reality.

“EDUCATION IS THE KINDLING OF A FLAME, NOT THE FILLING OF A VESSEL”

This is what the great Greek Philosopher Socrates said about  2500 years ago but is extremely relevant even today. We all know that education is essential for a child but the right guidance and proper handling can altogether change the direction of a child’s career. Moreover, we firmly believe in the essence of creating a relationship with the student by understanding his/her mindset and being a friend at first as a solid value and support system is the foundation of success in anyone’s life.

During Triple A’s transformation from a small coaching institute to a well-known name in the education industry, a lot has changed. Due to the highly competitive environment these days, students and their parents get stressed very easily. We want to share this stress, this burden of expectations, and therefore, for the past 31 years, are putting in all our energy and efforts, to develop our students and assist them in their efforts to come out WINNERS in various medical and engineering entrance examinations around the country . This endeavor is a journey that we embark on with our students from day ONE. We want to experience their feelings, frustrations, dreams, vision, difficulties, and pleasures and aim to give them an atmosphere that they will always remember and cherish in their LIVES….. 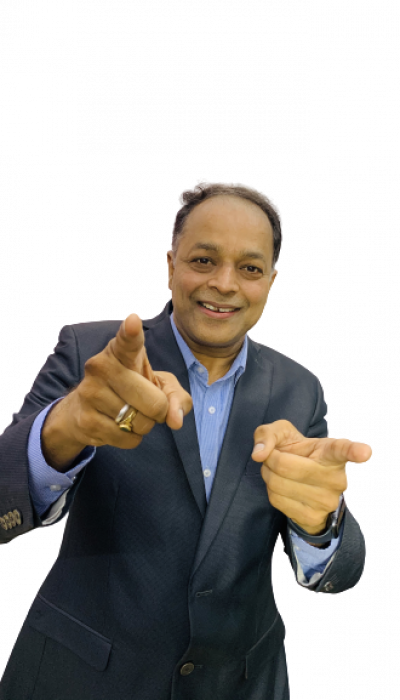 WHY TRIPLE A EDUCATION

-Best in class study material delivered at your doorstep

-Much more interactive and engaging sessions

-More than 20 ways to explain a concept

-Multiple tips and tricks to save time

-Our students are able to solve exam before time!

-100% unique and new tricks for each concept to develop interest in the topic.

B.Tech (Mechanical) Gold Medalist with a versatile and concrete experience of 26 years in IIT and Medical Entrance Coaching in a very approachable style and a founder member of Triple ‘A’ Education. He is the author of IIT Physics Books. He is having the privilege of being the first author in India for writing IIT–JEE Physics Challenger Book with new IIT- JEE pattern. He is the author of EIGHT Physics books which are running all over India. Best ranks so far AIR 1- Tyagrajan 2000, AIR 43- Abhishek 2005 and many more…..

A retired professor and Head of the Dept. of Mathematics having a teaching experience of forty five years to degree students and thirty three years teaching to students preparing for IIT/AIEEE and other competitive examinations. An author of over fifteen text books on mathematics for XI, XII and Degree classes. In addition, he teaches online to the teachers and students all over the globe. He has contributed to many international educational portals by giving mathematical lectures comprising of working models of mathematical problems.

M. Sc (life sciences). A genius of Biology having a teaching experience of more than twenty five years. Under his guidance thousands of doctors are practising all across India. He is one of the leading professors of Biology and has been a part of all leading institutes across India.

Ph.D (Chemistry) with a total IIT-JEE teaching experience of over 20 years. He is one of the pillars of TRIPLE ‘A’ after establishing numerous other institutes across India. He is a part of TRIPLE ‘A’ since its beginning . He is a national level eminent writer for many national journals.

Nishu Kumar Govil, is a first class Graduate in Electrical Engineering from Aligarh Muslim University. He has an experience of teaching IIT-JEE Mathematics of more then 15 years. He has worked with top brands in Coaching industry, including working for FIITJEE as professor for 7 years. Almost every year, his students are able to get top ranks in IIT-JEE, including AIR 53 of Saket Dingliwal in 2015. He has also worked as guest faculty of IIT-JEE in DPS RIYADH, SHARJAH, Indian International School, Damman, Saudi Arabia. He has also worked with www.topchalks.com a leading e-learning portal for IIT-JEE. He was also the consulting editor of TV18, educational channel ,TOPPERS TV

And In Print Media

What Our Students Say!

Triple A Education Centre is something unique in itself. The pattern of teaching here is comparable to none. After joining it, I feel that I have improved a lot because of the regular assessment tests and evaluation. This really helped me in introspecting and evaluating my strengths and weaknesses. After going through all the assignments, I overcame my fears and now I can attempt all objective type question papers. easily. I think this would not have happened , had I not joined Triple A Education.

Don't want to name the institute where I wasted my lakhs of rupees and on the top of that my extremely important two years which has now become a deep regret of my life. Seeing my this situation, my cousin brother who studied at Triple A Education about six years back and who is  now working in South Korea as a Technical Head, recommended me this institute and wow, can't thank him enough for this decision of me also joining Triple A and they are just like Mozart in disguise for me.

Triple A Education In Pics 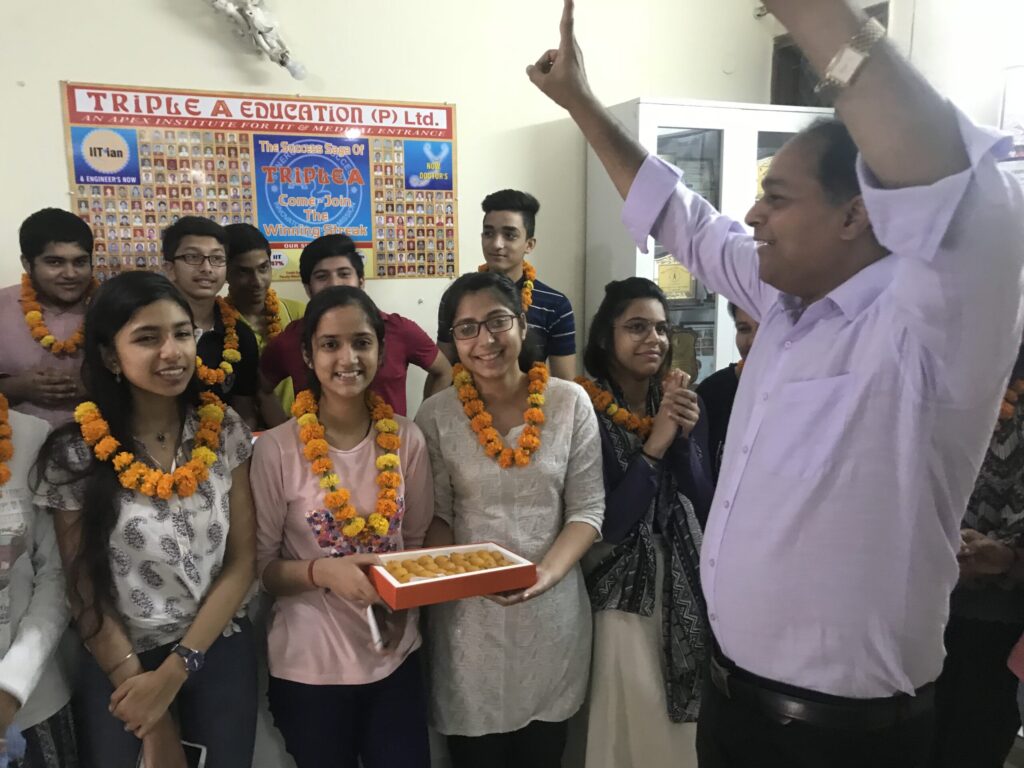 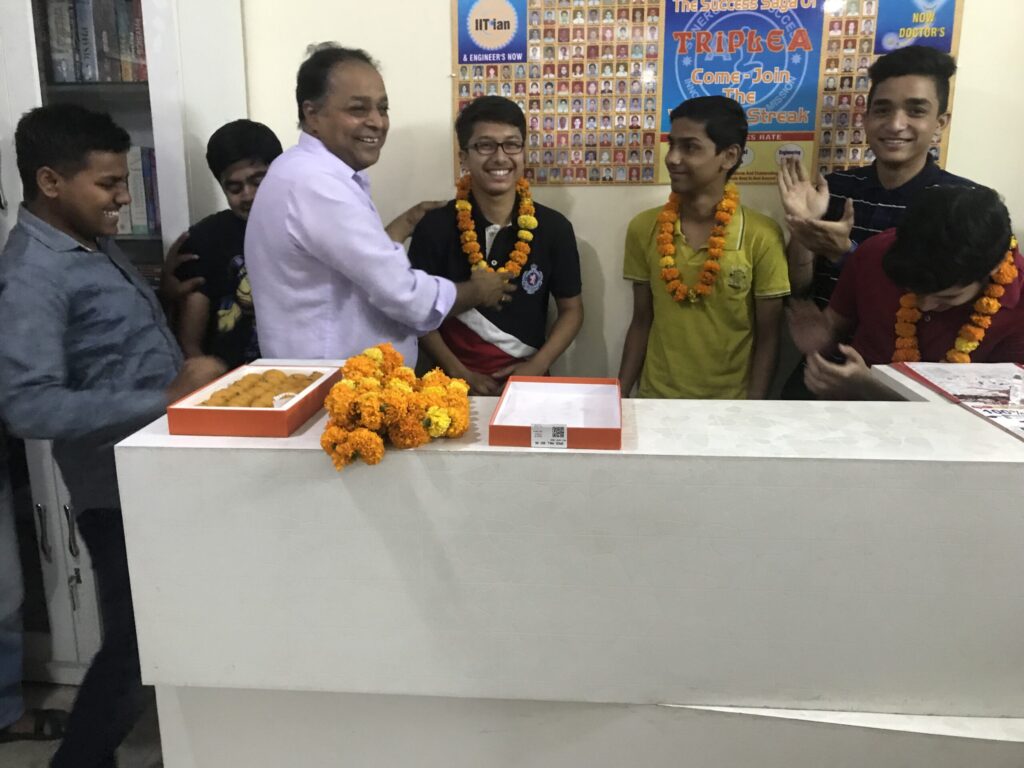 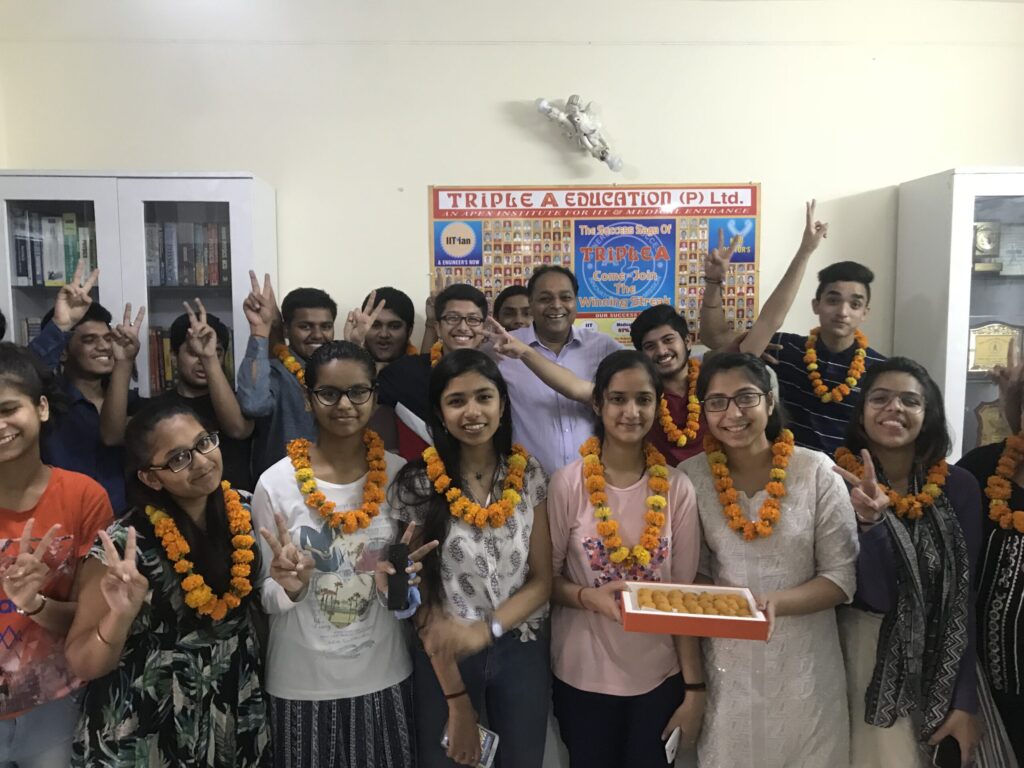 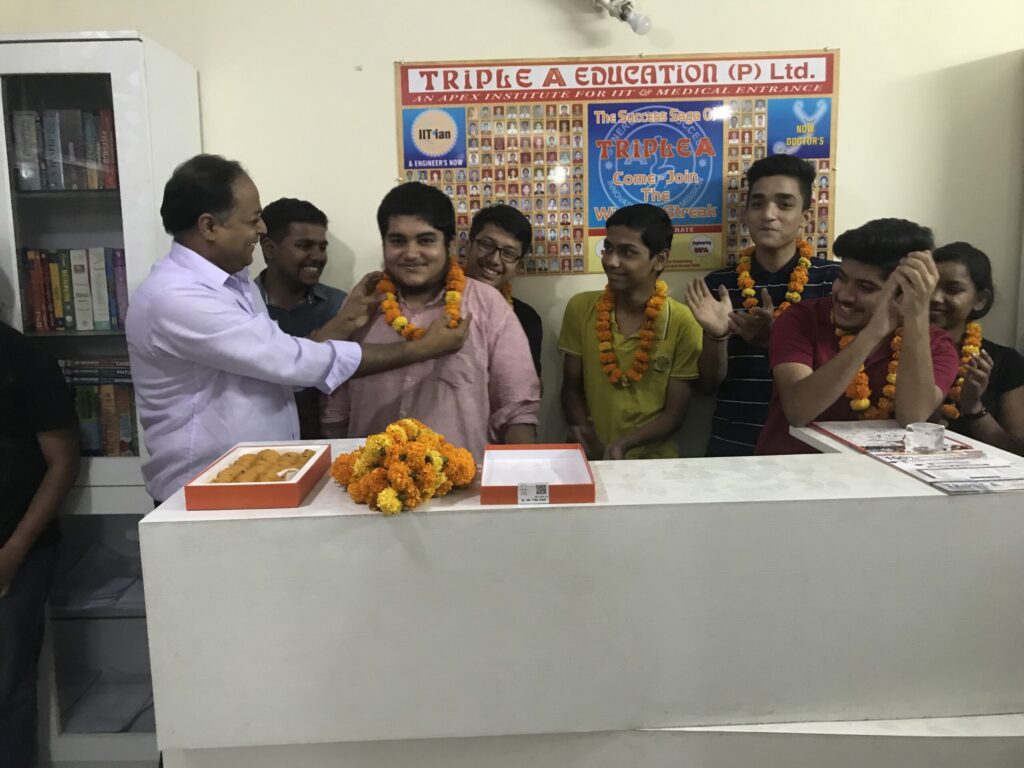 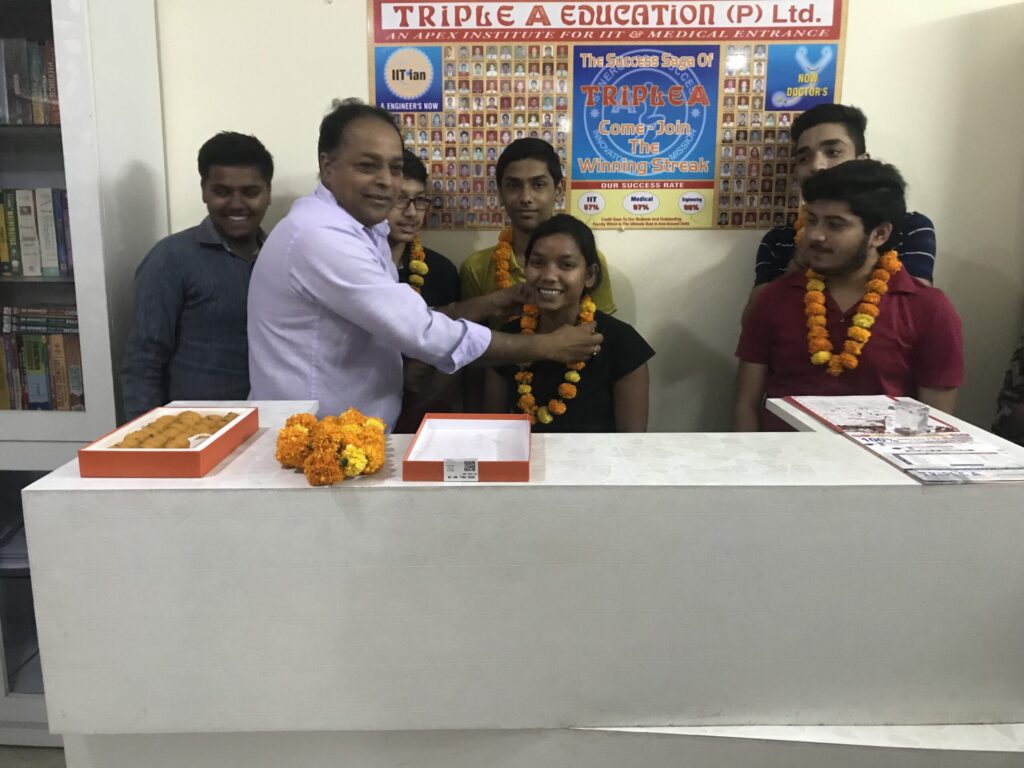 Triple A education In Pics 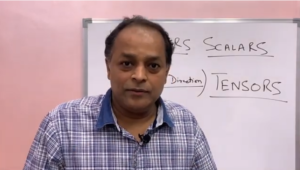 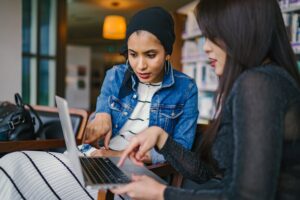 There are many variations of passages of Lorem Ipsum available,... Triple ‘A’ Education is a well knit family of untiring peerless, top notch most formidable eminent authors that have vim, vigor, force, energy and perfect comprehension to give them the complete command in the domain of IIT – JEE & MEDICAL preparation.

Unlike others our system revolves around truth, transparency and commitment with dedication. Last SEVENTEEN YEARS has witnessed a terrific success rate for Triple ‘A’ Education and that is the reason why we are one of the top Engineering and Medical Coaching Institutes of Noida and are said to be the ‘RIG OF SUCCESS’

With its unending gusto successfully running its TWENTY SECOND YEAR, thousands of young students have been short listed through our classroom programmers as ENGINEERS & DOCTORS.

So if you do you have the AMBITION and the ATTITUDE to become an ENGINEER or a DOCTOR, its time for the ACTION.  Join Triple A Education programme to give wings to your dreams. Triple A Education is your one stop destination to get relevant content and guidance from multiple expert resources.

Apply For Our Courses